Renown artist Michael Green produced a one-of-a-kind work of decoupage art for Ron Bane's office that features plans from the Monongalia Courthouse renovation as a base. 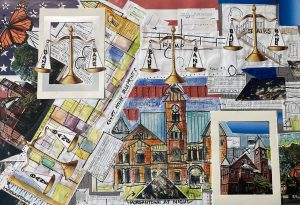 The Morgantown WV artist uses a variety of elements, like architectural plans, illustrations, and photos from the Monongalia County Courthouse renovation project blueprints to create a composition the size of a standard political campaign sign. The vibrancy of life in downtown Morgantown during day and night shines through in a diversity of colors. Geometric shapes of triangles and rectangles that feature acute and right angles make for sharp, stark contrasts between spaces and themes.

Triangles capture the essence of the scales of justice and the Romanesque courthouse with its towers and distinctive clocktower with pyramidal roof, as well as the entrance ramp that made the building more accessible to the public. Rectangles, in the form of windows, allow viewers to peer into the judicial system. To the average citizen, court can seem like a daunting set of steps, complex to navigate and reach the end: swift justice. More rectangles frame documents and photos that surround a defendants’ note with a plea of innocence that feels like it cries out to humanity to not allow the accused to wrongly be framed by a rush to judgement.

In the background, stars – in the shape and place of the American flag canton – and bars – in the form of what seem like jail cell irons in the center above the courthouse offer a hint of adversity and struggle between right and wrong. Whether an acknowledgement of the tragedies of the past, or an indictment of present realities, the juxtaposition can’t be ignored. The struggles of humankind to build a more perfect union are equally ancient and eternal, as old as the concept of justice itself.

“Our laws secure equal justice for all,” said Thucydides, Athenian general and historian, one of the first ancient philosophers to talk about the importance of a constitution in terms of upholding a free democracy as recorded in the History of the Peloponnesian War. The Grecian was called the “father of “scientific history” by those who accept his claims to have “applied strict standards of impartiality and evidence-gathering and analysis of cause and effect, without reference to intervention.”

In his Funeral Oration of Pericles, Thucydides acknowledges obedience and reverence to the laws while suggesting those laws which “offer protection to the oppressed and those unwritten ordinances whose transgression brings admitted shame” hold a special place and carry noble weight in a civilized society. His focus on “the road by which we reached our position, the form of government under which our greatness grew, and the national habits out of which it sprang,” in many ways parallels the American experience, themes of which echo through Abraham Lincoln’s Gettysburg Address, according to both Louis Warren and Garry Wills, American Civil War scholars.

The American judicial system offers a presumption of innocence until guilt has been proven to a court of one’s peers. Ultimately though, judges must pass sentence when guilt has been determined by a jury. Green’s artwork reminds people that the line between freedom and existence – life outside versus inside jail – is fragilely thin, and not always straight nor clear. The artist takes a measured approach in the piece, paralleling the measured time and thought that is necessarily required to reach a just verdict.

“Law is the art of the good and the equitable,” opined Publius Juventius Celsus, one the most influential ancient Roman jurists of the High Classical era, whose style has been described as “bold and biting.” In many ways, this can also be used as one metaphor by which Michael Green’s work can be interpreted and given a broader perspective. The overall impression left by the artists’ bold themes and biting colors are clearly bounded in classical composition style as shown in the form of a Golden Triangle.

Transformation is prominent throughout Green’s work. While the Monongalia County Justice Center is now where court is seated, the Monongalia Courthouse remains firmly set as the county seat in the heart of the greater Morgantown community. Renewal, whether seen in the form of the renovation blueprints or images of Monarch butterflies encapsulate the beautiful object of art, and add delicate touches of hope for the State of West Virginia and the United States of America.

Michael Green welcomes art patrons by appointment at his Hog Fence Studio & Gallery located at 357 Brockway Avenue, in Morgantown. Green is a renowned Morgantown WV artist. He’s also a retired teacher who inspired many students over the years at North Elementary and Morgantown High. Learn more about Artwork by Michael Green, LLC on Instagram and Facebook and make an appointment to visit the artist and enjoy his work, or watch for open gallery hours on social media.